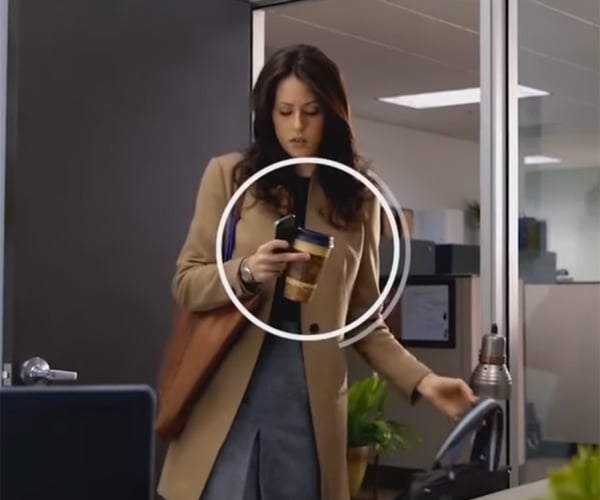 Coffee Cups have become indispensable in English and Euro Culture now, but it’s been part of the American pop culture for much longer and as expected Paper Cups or Takeaway Cups have featured an umpteen number of times in Hollywood movies as well.

Whenever a detective, or a lawyer or a busy executive or a very upmarket lady is shown walking the street, or starting off for work, there is this single or pack of coffee cups in her hand, because coffee and paper coffee cups symbolise an American morning more than anything else.

Paper cups are indispensable part of one’s daily life, be it in UK or USA or any other coffee loving nation, and thus their often inclusion in important movie scene design is used to prop up the effect of a busy, or intense day. In a way, paper cups have become indispensable in reel life as well.

But, unlike real life, coffee cups are always empty in reel life.

Recently we came across   #EmptyCupAwards on twitter, where people are sharing clips of movies and TV shows, wherever they find actors using empty coffee cups.

Ever wonder why actors use empty coffee cups and not the otherwise usual “satisfactorily filled with their choice of coffee” coffee cups?

After digging some more, we found some valid reasons behind this use of empty coffee cups in movie, TV shows.

One of the legit reason is the risk of getting expensive production equipment accidentally wet, this risk is pretty high if they use filled coffee cups instead of empty coffee cups. Actors, technicians or anyone present could trip and a small amount of liquid could do serious damage to props and equipment.

Second reason would be consistency of shots.  As we know that a single scene requires multiple takes, if there really were liquid in the cup, and the actor were really to drink from it, during the multiple takes necessary to obtain coverage of a scene the cup would have to be constantly refilled to the exact same level it was at at the beginning of the scene, or at the last point in the scene where the cup’s contents were visible.

Another valid reason if a scene requires actors to actually drink actually from a coffee cup, after multiple takes they would be too caffeinated and would not sleep for the next decade.

Although in movies, you’d usually always see coffee cups with lids, which helps in disguising the

The reason behind this  #EmptyCupAwards  is to let the makers of our shows know that the audience is watching.

In other words when you are creating something that portrays real life on reel then try hard to make everything realistic. An empty weightless coffee cup is very unreal, if a little volume of some liquid can be added to these coffee cups when they use them in the movies, the weightless coffee cups won’t look so unreal. Actors often forget to act as if they are holding something hot and heavy, and to the discerning eye that is becoming an eye sore. So let’s keep hunting Empty Coffee Cups and tag along #EmptyCupAwards.