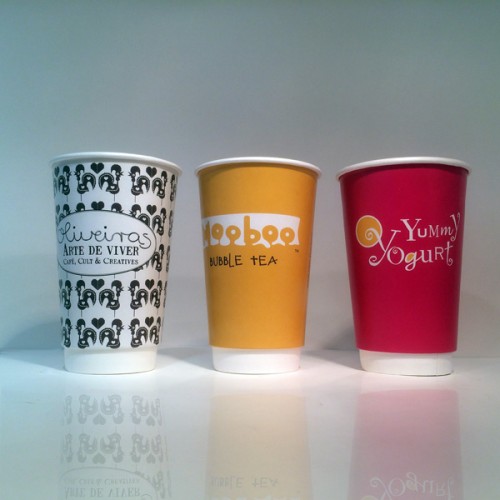 We are the 100% UK manufacturers of disposable printed paper cups.What are these disposable cups? When did these become the part and parcel of our daily lives?infact if you notice you’ll find that your first financial transaction of the day starts with a hot coffee served in a paper cup on your way to your work.

Disposable cups can be defined as cups which have been designed for or capable of being thrown away after being used or used up.

Disposable cups can be made of different materials like Plastic,Styrofoam and paper.

Among these materials paper cups has become the common and popular choice of people.

In beginning of 20th century people used to drink from public water barrel,well,pump or spigot with a communal tin cup.This practice of this kind of  public drinking was very unhygienic as healthy and sick people used to share the common stationary tin cup to drink.This sharing by both sick and healthy alike often was the source for spreading germs and disease.

During this time to stop this sharing of germs by using a common stationary cup at public drinking  water fountains.An American lawyer named Lawrence Luellen, of Boston,  Massachusetts, have came up with an idea of “Hygienic Health Kup”.His idea was to place a paper cup dispenser beside water coolers so that the drinking utensil could be thrown away after use.The Health Kup was a simple drinking utensil created from a cylinder of plain paper wrapped around a disc of hard paper as it’s bottom.To make the paper water proof Paraffine,a wax by-product of petroleum was used.

Despite several campaigns these Health Kups were not getting that much of steam which they gained following the Great Influenza Epidemic  after World War 1 in 1918.During this time the demand of Health Kup rose to a sky high level.Commercial premises started ordering water and cup dispenser in much the same way as water coolers are ordered today.

Originally this hygienic paper cup was marketed as the Health Kup (the K used instead of C in cup spelling was a marketing trick to indicate that this cup was your friend) although after 1919 it was renamed as the Dixie Cup  after a popular range of cute dolls.

The basic cup design that was big enough to hold a gulp or two of water remains same more or less.A rolled lip has been added to the cups to make it more comfortable and pleasant to drink from.

Although paper cups were invented and promoted as the hygienic alternative to the stationary water utensils used at the public water drinking points but as time progresses another vital aspect has been added to this hygienic Heath Kup.A cheap yet effective advertising tool for modern day establishment. A bespoke paper cup containing your company logo and slogan can reach to many people easily than a big billboard.Our in-house design team at branded paper cup offers you a personalised assistance to achieve your ad campaign goal at a reasonable price.